What is music therapy. What happens in our brain when we listen to music? 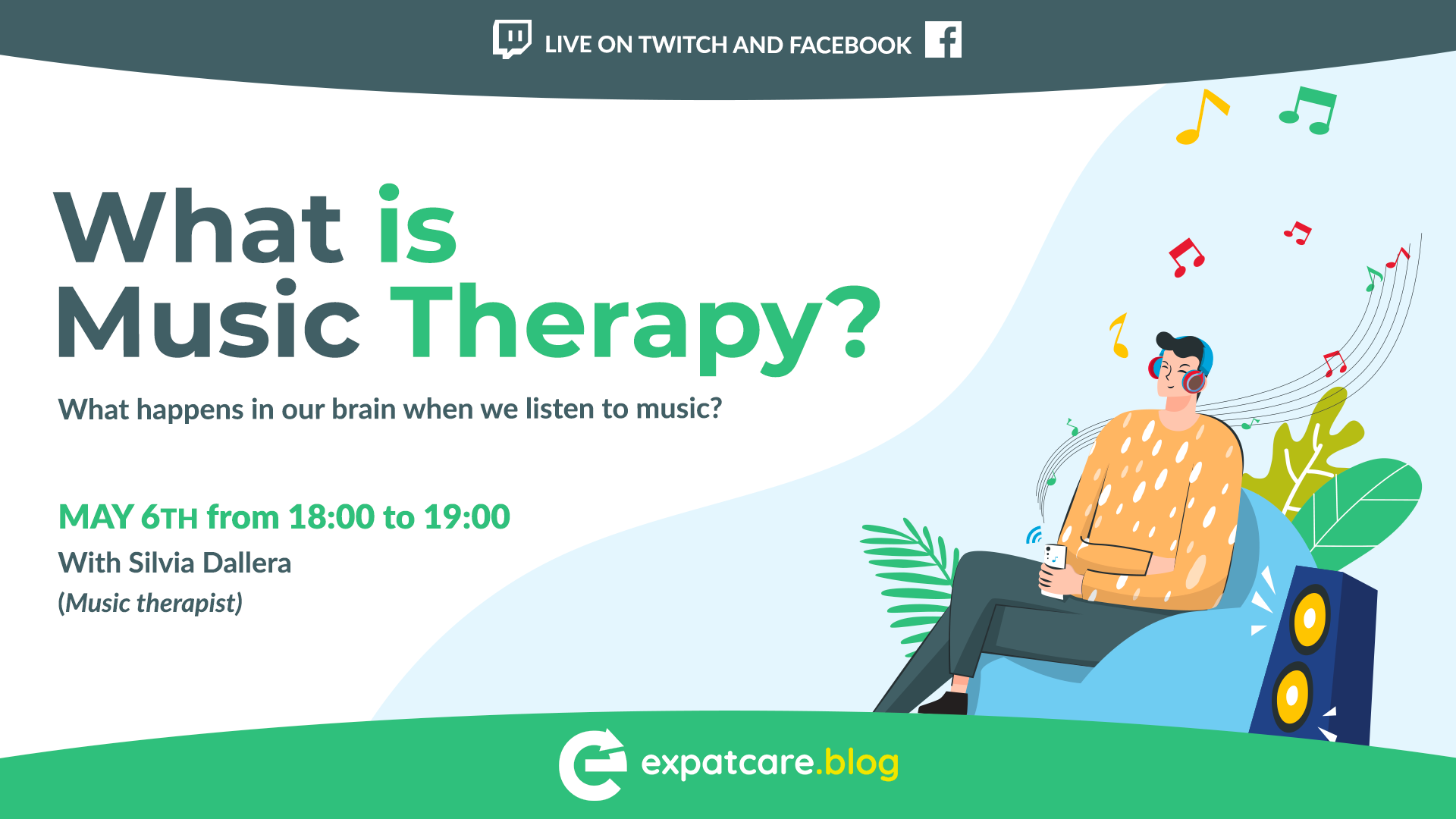 ExpatCare in collaboration with Silvia Dallera, musician and song therapist, invites you to the live event:

👉  What is music therapy. What happens in our brain when we listen to music?

ℹ️  What is music therapy?

Before talking about effects and connections music-brain we have to talk about what is music therapy.
Music therapy is a technique that uses music as a therapeutic tool; therefore music is used as a non-verbal communication tool to intervene at a therapeutic, rehabilitative and educational level.
We are surrounded and immersed by sounds even before birth, from the womb, and these sounds, noises and silences have always influenced our lives.
The music therapist therefore uses the voice and musical instruments to promote the physiological, psychological and emotional integration of the individual during the treatment of an illness and/or dysfunction.

But what happens in our brain when we listen to music?

Given that every genre of music does not have the same simplistic effect on everyone, since it depends on personal taste, experience and even the degree of erudition on the subject (American studies in fact show that music professionals listen differently from simple enthusiasts. The former have an analytical approach, the latter an emotional one).
The art of sound does not relax everyone in the same way, but it does have an effect on every human being.

“Music is able to activate the brain and modulate levels of arousal, concentration and relaxation by acting on the electrical activity of the brain.”

Normally, our brains ’emit’ brain waves, i.e. electromagnetic waves that represent the activity of our brain, depending on so-called states of consciousness. In everyday life we all go through different stages of brain activity, from the waking state to the different stages of sleep through beta, alpha, theta and delta waves.

The sound wave, which also has a frequency (perceived as pitch) and an intensity (relation to volume), characterised by a shape that corresponds to the timbre that differentiates the different types of sound, propagates in the air or in another elastic medium and reaches the auditory apparatus of the ear which, through a complex internal mechanism, creates an “auditory” sensation related to the nature of the vibration. In particular, the tympanic membrane undergoes pressure variations and vibrates. A particular phenomenon occurs: the sound waves synchronise with those of our brain, determining different states of consciousness, hence excitement and relaxation.

Music also activates areas of the brain that are involved in movement, programming, attention, learning and memory.
Music also releases a chemical called dopamine in the brain that improves mood and reduces anxiety. Dopamine also transmits pleasure, joy and motivation.
Music strengthens your immune system. It can create positive emotional experiences that trigger the secretion of hormones that strengthen the immune system.
It enables patients with severe brain injuries to recall personal memories.
Music also relieves pain. Surgical patients who listen to music before, during or after surgery show reduced scores on the pain scale, a reduced sense of anxiety and need for analgesics.
Music helps in the production of a stress-related hormone called cortisol: cortisol increases the brain’s utilisation of glucose, it is primarily a source of energy.
Cortisol improves the availability of substances needed to repair damaged tissue.
When we listen to a song, the two hemispheres of the brain are activated: the left hemisphere (which deals with logic) focuses on language, the right hemisphere (which handles the more intuitive functions) on music, creating connections between them. The right side of the brain activates the imagination and gives rise to the most diverse emotions, while the left side analyses aspects such as the structure of the song and the words of the song.

Silvia Dallera
“My name is Silvia Dallera and I am a singing and music teacher, singing and music therapist. Before moving to Berlin 4.5 years ago, I worked in Italy in various music schools and psychiatric centres.
Since I was a child, I started studying music and played the transverse flute for 10 years. The passion for singing and other instruments came later during my adolescence.
I have always been passionate about music but also about psychology. After graduating from DAMS, I attended a master’s degree in Music Therapy and training in Singing Therapy, and then worked in social field.
Always passionate about voice, breathing and therapy, I started working in psychiatry and privately offering consultations and individual and online sessions. Not only for adults but also for children.
I continue to study and research therapy through voice and breath. Fundamental to me are music and the search for self and well-being through these instruments.”

In case you want to change your privacy settings (e.g. issue consent or revoke an already issued consent) please click on the button below. Settings